10 Things I learnt about Arkansas Stones

1)  Not for sharpening tools:
Not a typing error too.
I'm sure everyone has a dull knife or two in the kitchen. The type that will not cut meat or slice bread. You may be able to push-cut an apple, but that's all it'll do. Or that vintage ebay Marples chisel or that plane iron off a vintage Bailey. The edges on these tools will need to be dressed (chips ground-out, skew-edge squared, rolled-edge removed) and re-profiled (irregular and multiple bevel angles corrected) on a bench grinder or a coarse diamond plate, carborundum stones etc.

Use Arkansas stones for honing and polishing. Old timers call it whetting. These processes, along with dressing and grinding, forms part of sharpening, but what I'm saying is this: Do not start with Arkansas, unless the edge is still quite sharp and just needs a touch up.


2)    Same name, different rock,
and sometimes, same rock, different names. Frequently, the dude who sell you the stone do not know much about it, let alone using it.
3)    Water will work, but oil is easier to use.
For one, it penetrates the stone better, forming a swarf resistant barrier that would otherwise glaze and clog your stone’s surface. Water tends to bead up at the slightest hint of oil, and a water lubricated stone dry out faster. If you really must use water, add a few drops of dish washing detergent. It improves the wetting effect drastically.


4)    You can speed up your stone.
If you rub a diamond encrusted plate lubricated with oil prior to sharpening, it does 3 things:
a)    Slurry formed aids sharpening. A slurried stone cuts faster. It behaves like a friable water stone.
b)    To a lesser extent, you flatten the stone a little.
c)    The scratch pattern is somewhat more pronounced, leveling off as the slurry gets processed and flushed out by oil added.

5)    Change the grit without changing the stone?
To touch up a chisel, I sometimes rub a piece of carborundum stone onto an oily Washita stone, and I use the slurry to kick start my sharpening on my Arkansas stones.


We all know that carborundums are fast cutting soft stones, and using it on a slightly dull but perfectly symmetrical tool may do more bad than good on a chisel that is merely in need of a touch up. The next best thing is to impart the aggressive cutting silicon carbide crystals to your gentle but flat Arkansas stone.As you move up to your harder and finer stones, use a Washita to impart an oily slurry on your translucent stone, and so on, flushing out the slurry as you finish.

Black surgical slurry on black surgical stone seems to “aid” a usually slow finishing process. Now you know why some woodworkers add diamond paste. (A word about such paste: unlike silicon carbides in carborundum, which are easily flushed out, diamond paste can be quite persistently embedded in your stone, so choose an appropriate grit)

6)    The longer the stone, the lesser the stroke. Six to eight inches by two inch wide stones seems to work well for me.

7)    Again, you can alter the grit of the stone simply by using oils of differing viscosity (you can thin-out mineral oil with kerosene) If you pour kerosene on a coarse stone, it gets absorbed too fast into the stone. Adjust your cutting fluid just thick enough so that a film stays on your stone for many strokes, but not so thick that it forms a barrier that impedes the sharpening action. Experiment.
8)    Any oil is better than no oil. Olive oil will turn rancid and gum up, clogging the pores. (They work, at least on a short term) Grape seed oil, camellia oil(expensive), clove oil, baby oil (works well if you do not mind the baby smell), mineral oil, 3-in-1 light machinery oil, WD40 (these may leave a yellow residue on your white stones)

Petroleum Jelly( VASELINE ) works great for tempering Carborundums that cuts too aggressively or does not retain lube film well on the surface) The best oils to use are non-drying oils, and preferably colorless and odorless.

9)    Check your stone for flatness:
Washitas and soft Arkansas do get hollowed by uneven use.They are not much of an issue if you are doing a kitchen knife, or the bevel of a chisel. The back of an chisel or plane iron will be "bellied" on a hollowed stone, making burr removal ineffective on subsequent stones.
10)   My stone is not cutting..
If you are applying more pressure or putting in more strokes than what feels right, your stone is not cutting(diamond-plate!), or you’re using too fine a grit. You are wasting your time. 20 to 200 strokes per stone feel healthy to me. You need to strike a balance between speed and fineness of edge. Obviously, we do not need to polish a scrub or jack plane iron the way we finish a smoothing plane iron or straight razor.

So much for my theory. Nobody said you cannot grind out an edge on a grinder, on  sheet glass-backed 80 grit sandpaper, or on carborundum stones, then sharpen and hone on your Arkansas, and  finally strop on leather. The only rule governing stones is to use what works for you. I’ve seen folks sharpening jack knives on cinder blocks and honing on bricks. That guy then proceeds to shave his leg. The idea is to know who you are: A handtool user seeking the most efficient way, an old school hand tool purist (little regard for cost or time), or a revolutionary trying to prove a point. Then you will know what you need.

When I was still playing with waterstones, namely Japanese synthetic stones, the slurry that gets left behind after the water bucket has dried up are saved. These are probably Aluminium Oxide particles. I use this powder as a boost to my Washita, when I want to speed things up a bit. I mix in a pinch with some mineral oil on the stone surface. This is similar to using a Japanese flattening plate called "Kanaban"
Woodworkers in Japan will flatten the blades of their plane on a mild steel plate encrusted with bits of silicon carbide. 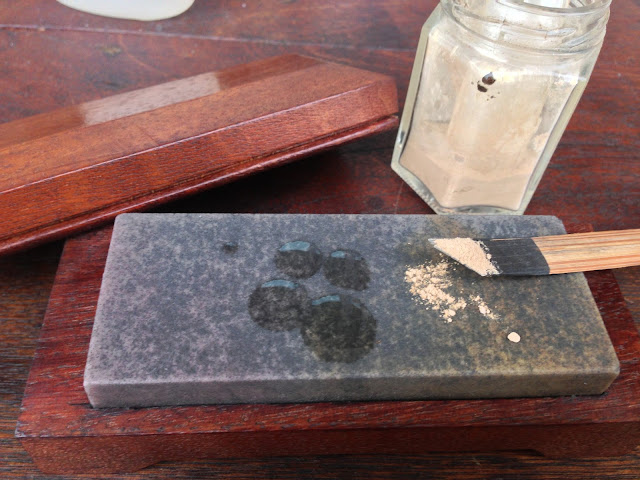 I do not think what I've just described is anything new or innovative. I would love to hear what you use for your sharpening needs.

Popular posts from this blog

May 24, 2012
What on earth are they? A user made box of assorted Arkansas stones. They are America's answer to: The Wales' Welsh Slate (Dragon's Tongue); The Scotch Tam O'Shanter; The English Charnley Forest stone; The Japanese Tenin Toishi; The German Thuringian Hone; The Chinese Guangzhou River bedrock; The Belgian Coticule; You get the idea. Local rocks that you use to sharpen mama's kitchen knives. ﻿ ﻿﻿ A collection of smaller pocket-sized Arkansas stones ﻿ In this entry, I will not try to tell you what you probably already know. What is the point of describing that oily rock you already have under your bench, in your drawer, in a can of kerosene? Note also, that the sharpening I describe here is best applied to woodworking in general. I am an amateur handtool woodworker. Sharpening a straight razor would be entirely another branch of science. I do not profess to know all there is to know about sharpening or Arkansas stones; I simply failed
7 comments
Read more

August 29, 2012
R eally?   Well, it's everywhere, check Granpa or uncle Tim's shack ( if you include copies of it by lesser tool makers) For something so abundant (well, Stanley sold them by truckloads), so common and so relatively inexpensive, I will attempt to wax some lyrical on them. By "them" I mean their design, their construction. The plane pictured above was purchased off ebay for $4.90. It looked like Joe Meatball (to borrow Patrick Leach's character) bought it, used it on some hardwood (pre silicon valley micro chipping at the edge)without first fettling the plane(unsharpened factory bevel), and put it away (in some dry place), and totally forgot about it. First off, at Five Bucks, how can you go wrong? Five bucks don't buy you a door wedge these days. ﻿ ﻿﻿﻿ STANLEY'S SUPERIOR ADJUSTABLE HEIGHT DOOR WEDGE, TYPE 16. ﻿ 1) The lever cap also serves as an ergonomic palm-rest to push the plane forward, and the oval shaped  cut-out serves as a hanging h
7 comments
Read more

A Case for Chisels: Stanley 5000 series

May 11, 2014
“Life being very short, and the quiet hours of it few, we ought to waste none of them in reading valueless books.” -John Ruskin. Substitute the word "books" with "blogs", and perhaps you should stop reading. I did my part and you are warned. No, I can't refund 4 minutes of your life. F or the most part of my woodworking life, I've kept my loose chisels in felt lined drawers. (I mean excess chisels purchased on impulse: Those of cast steel, those of boxwood, those octagonal London snobs, those ergo grips that promises an orgasm with each mortise, the socketed, the tanged, the handle-less tangs, the long paring ones, those curious crank-necks, the basic pig stickers, the vintage ferrule-less-...you know. I know. Some folks have too many hammers or smoothing planes or trammels. I'm a chisel guy. But the ones that are constantly on the move live in a canvas tool roll. I like the look of a chisel roll, except that the edges tend to slice the
4 comments
Read more